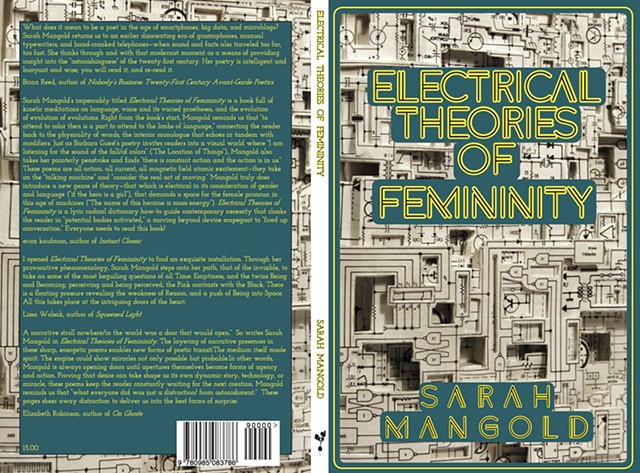 ELECTRICAL THEORIES OF FEMININITY
< previous next >

Woven through the writing of early 20th century literary innovator Dorothy Richardson and the contours of contemporary poetics, Electrical Theories of Femininity co-opts the history of media archeology to reveal “the medium made spirit”. These lyric meditations embody the history of technologies that carry human perception across distances to celebrate the Computer at her station.

Advanced Praise "What does it mean to be a poet in the age of smartphones, big data, and microblogs? Sarah Mangold returns us to an earlier disorienting era--of gramophones, manual typewriters, and hand-cranked telephones--when sound and facts also traveled too far, too fast. She thinks through and with that modernist moment as a means of providing insight into the 'astonishingness' of the twenty-first century. Her poetry is intelligent and buoyant and wise; you will read it, and re-read it." ——Brian Reed, author of Nobody’s Business: Twenty-First Century Avant-Garde Poetics

"Sarah Mangold’s impeccably titled Electrical Theories of Femininity is a book full of kinetic meditations on language, voice and its varied prostheses, and the evolution of evolution of evolutions. Right from the book’s start, Mangold reminds us that 'to attend to color then is a part to attend to the limbs of language,' connecting the reader back to the physicality of words, the interior monologue that echoes in tandem with modifiers. Just as Barbara Guest’s poetry invites readers into a visual world where 'I am listening for the sound of the fall/of colors' (“The Location of Things”), Mangold also takes her painterly penstroke and finds 'there is constant action and the action is in us.' These poems are all action, all current, all magnetic field atomic excitement—they take on the 'talking machine' and 'consider the real act of moving.' Mangold truly does introduce a new genre of theory—that which is electrical in its consideration of gender and language ('if the hero is a girl'), that demands a space for the female pronoun in this age of machines ('The name of this heroine is mass energy'). Electrical Theories of Femininity is a lyric radical dictionary how-to guide contemporary necessity that cloaks the reader in 'potential bodies activated,' a moving beyond device scapegoat to 'fired up conversation.' Everyone needs to read this book!" ——erica kaufman, author of Instant Classic

"I opened Electrical Theories of Femininity to find an exquisite installation. Through her provocative phenomenology, Sarah Mangold steps onto her path, that of the invisible, to take on some of the most beguiling questions of all Time: Emptiness, and the twins Being and Becoming, perceiving and being perceived, the Pink contrasts with the Black. There is a floating pressure revealing the weakness of Reason, and a push of Being into Space. All this takes place at the intriguing doors of the heart." ——Lissa Wolsak, author of Squeezed Light

"'A narrative stroll nowhere/in the world was a door that would open.' So writes Sarah Mangold in Electrical Theories of Femininity. The layering of narrative presences in these sharp, energetic poems enables new forms of poetic transit: 'The medium itself made spirit. The engine could/ show miracles not only possible but probable.' In other words, Mangold is always opening doors until apertures themselves become forms of agency and action. Proving that desire can take shape as its own dynamic story, technology, or miracle, these poems keep the reader constantly waiting for the next creation. Mangold reminds us that 'what everyone did was just a distraction/ from astonishment.' These pages sheer away distraction to deliver us into the best forms of surprise." ——Elizabeth Robinson, author of On Ghosts