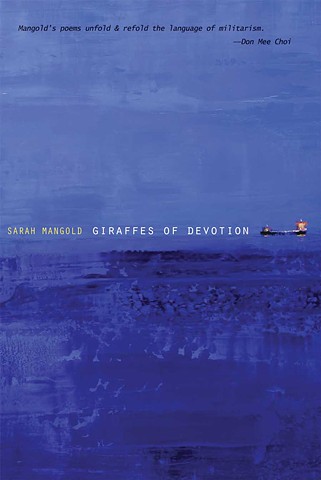 GIRAFFES OF DEVOTION
< previous next >

In the mid-1920s, Mary Taylor Alger Smith followed her husband Lieutenant Commander Roy C. Smith, Jr. from Annapolis to Shanghai with their four children. Giraffes of Devotion excavates the transcript of her oral history given to the U.S. Naval Institute. Boxed in newspaper columns, fragments, repetitions, and silences, history and human lives are broken apart and pieced together through language. Framed within the domestic sphere of military service, facts and speech are misheard, whispered, indexed and reassembled to reveal the word made spirit. An erasure of a historical text filtered through family-lore, the new narrative creates a rebelliously voiced witness and investigator into the history of family, nation, and war.

Praise for Giraffes of Devotion

Sarah Mangold unfolds from her great-grandmother’s letters the over century-long continuum of land takeover for military bases and expansion of the U.S. empire in the Asia Pacific Region. And what Mangold refolds, meticulously, through erasure and collage, is the language of militarism and its cultural norms. Edward Said says, “At some very basic level, imperialism means thinking about, settling on, controlling land that you do not possess. . .” Giraffes of Devotion offers it’s own definition, not unlike Said's: “It seems to me there was always a ship in the background and somebody worrying about it.” ——Don Mee Choi

This is a rare and perhaps unique book. . . . The work never nudges or blinks; we are simply within this universe, and, it is, while we are reading the book, the only reality that we have. Giraffes of Devotion is a tour de force, and much, much more——poetry in its most serious and moving incarnation.——Edward Smallfield

Sarah Mangold’s Giraffes of Devotion engages “the methods of teaching history / by which I mean each day is a pearl to be prized.” The pearls threaded by this long poem are pierced by history’s needle, but they do not record it. History is the gap inside each vignette, the lump in the throat these beads adorn, the unspoken context of anti-foreign sentiment in China in the early twentieth century. Mangold strings together the lives of two generations of women who found themselves inadvertently positioned as occupiers abroad. Whether fact or memory, what has been prized from these sources is pried open with care, revealing pearls of great price.——Amaranth Borsuk